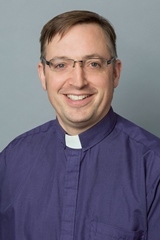 Born and grew up in Northern Ireland.

Lived and travelled in India, Nepal and Germany.

Ordained in Christ Church Cathedral Dublin (Church of Ireland - Anglican). Assisted at the Mission to Seafarers while a student reader at St Anns Dawson St in Dublin.

Served as Curate at St Brigids Stillorgan and All Saints Blackrock, Dublin. (Church of Ireland - Anglican)

Moved to Canada in January 2001 and served as incumbent  in St Michael and All Angels Anglican in Thunder Bay, Ontario, Diocese of Algoma.

Moved to Sault Ste Marie, Ontario in 2011 and served as incumbent at Holy Trinity Anglican

Moved to and presently in Vancouver, British Columbia September 2016 to the position of Senior Chaplain with the Mission to Seafarers.