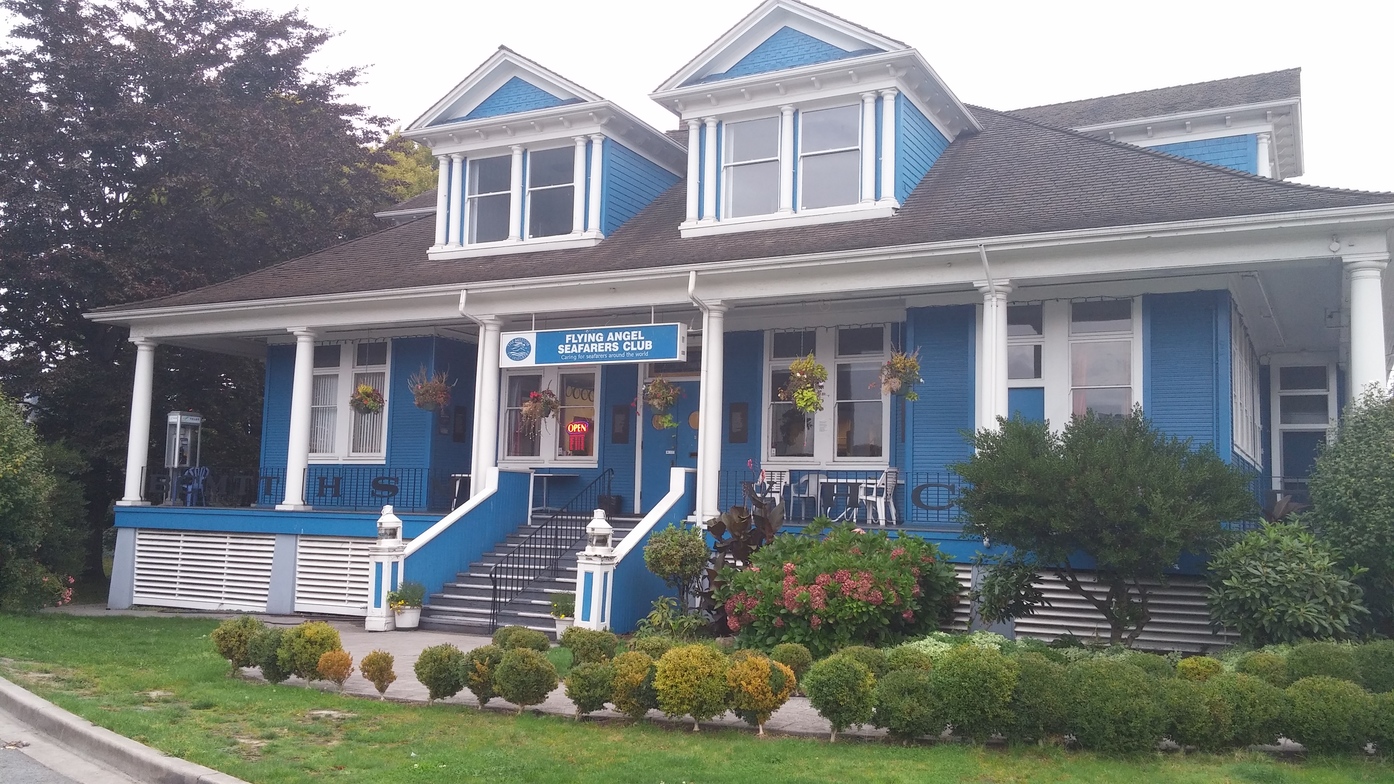 The following tribute and recollection is from George Adams a supporter of the Mission to Seafarers.

In mourning the recent death of the Rev’d Joseph D. Parker the maritime industry will recall his years as the Senior Chaplain at the Missions to Seafarers in Vancouver and his memorable contribution to our waterfront. When Joe Parker arrived in Vancouver to take up the position of Senior Chaplain of the Mission he had recently suffered a major family tragedy during the unrest in Northern Ireland.  He bore his loss with great courage and immersed himself in the activities of the organization and in understanding the complexities of the local marine and waterfront industries and the people involved. Joe and his family lived in very sparse accommodation on the upper floor of the Mission - the only positives being that it was convenient to his work and had a waterfront view.

For Joe, the Mission was his life and it seemed he and his wife Dorothy were always working on some major project at the Mission which faced issues which are familiar today, chiefly associated with financial sustainability or administering to the many needs, spiritual and otherwise, of seafarers. Joe had an extraordinary gift of remembering individuals, organisations and contacts who might be called upon at a future date to help in some way with whatever the current issue happened to be.  Perhaps he should have been a super travelling-salesman or perhaps it was his Irish charm but he succeeded keeping the institution going through extremely difficult times.

In my opinion, Joe’s greatest legacy is the historic heritage building which now houses the Mission and which, after his pleading, begging, cajoling and persistent reminding, was transferred from the port authority. His recruiting skills were enormous and many members of the local shipping industry found that somehow they had volunteered to assist in various tasks.  I became such a target. At some time and at some function he attended, Joe had “run-into” the head of the Vancouver Foundation and somehow a scheme was developed whereby an endowment fund would be established from which fund interest would be earned to benefit the Mission.  The Foundation offered to match whatever the Mission was able to raise, up to a set maximum.  I, foolishly, succumbed to Joe’s pressure (“No” was not an acceptable response) and agreed to co-Chair this campaign.  The team made full use of Joe’s talents of persuasion with great success especially on the more difficult donors and the campaign targets were exceeded. After that, I was “persuaded” to serve on the Board of the Mission for about ten years as the Treasurer - to Joe it mattered not that I had neither accounting qualifications nor training.  Fortunately, I did have a competent accounting department on whom I was able to call to keep us all out of trouble and to help balance the books.

Joe was absolutely dedicated to the Mission and to the seafarers with whom he came in contact both on board the ships and at the Mission.  The huge part played by Dorothy, much through the volunteer “Light-keepers” organisation, is often overlooked or taken for granted but together they formed a wonderful team at a time when the maritime industry and life at sea were undergoing dramatic and radical change.

Seafarers visiting these waters benefitted greatly from the Parkers’ interest, compassion, enthusiasm and genuine concern and they returned to their distant families with many tales of their home-away-from-home experiences at the Mission in Vancouver. Joe was a real character and a true missionary.

Born in County Kilkenny, Ireland, October 9, 1928, the Revd Joe Parker died at age 89 on Saturday, April 21, 2018, in Penticton BC. He is survived by his wife, Dorothy, son, Roger (an Anglican priest), daughter, Karen, grandchildren Andrew and Heather, and brother Lovell. He was predeceased by his son Stephen on July 21, 1972, who died while warning others of an unexploded car bomb in a residential neighbourhood of Belfast, Northern Ireland. Joe and Dorothy were very involved in establishing the Stephen Parker Trust which continues to this day funding an award for the City of Belfast Youth Orchestra.

After a career in business, Joe studied Theology at Trinity College, Dublin and was ordained in 1962. He served his curacy at St Donard, Bloomfield, Belfast. He rejoined the Mission to Seafarers Society in March 1964, and was appointed as a Chaplain in Belfast in September 1964, serving until 1973. He was granted a sabbatical and founded theWitness for Peace Movement in Northern Ireland. Joe noted in the Vancouver Sun in May 1993 that, “We held services for everybody, soldiers, IRA, everybody, all the dead… A lot of people in my own church didn’t approve of what we were doing. I was asked by my bishop if I would confine my peace activities to my day off.”

Joe was installed as Senior Chaplain of the Vancouver Missions to Seamen in March 1975, retiring in 1993. Joe and Dorothy were the last to live upstairs in the Flying Angel Club on Dunlevy Street. Joe and Dorothy retired to Penticton in 1993. Joe had been in declining health for a number of years. A funeral service will be held Monday, April 30 at 10:30am at St Saviour’s Anglican Church,150 Orchard Avenue, Penticton.

All of us at the Mission to Seafarers offer our prayerful support to Dorothy and family with thanks for Joseph's enduring legacy of caring for many seafarers over many years.  Rest in peace and rise in glory.